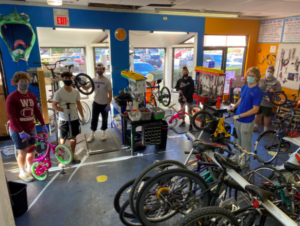 Salve volunteers help clean and repair bikes at Bike Newport in the Fall of 2020.

Bike Newport has been helping the Newport community for years, helping to keep Newport cyclists safe. I’ve had the pleasure of being their Service Advocate for the past year and half and have been able to witness the wonderful things they’ve accomplished in just that time and what they continue to accomplish.

When I started volunteering at Bike Newport, they were moving into their tenth year of being established, a huge achievement! And they made sure that it was a memorable one. My first experience in Bike Newport was helping them get ready for their Pell School Holiday Bike Giveaway. Not only was it my first time in the office, but it was the first time they had Salve volunteers come in and help them get the bikes ready for the giveaway. For the next few weeks, Salve volunteers would come and help in the Bike Garage and I helped out everywhere in the office where they needed me, including cleaning bikes

Unfortunately, due to COVID restrictions, I couldn’t come back until the spring semester. There I saw the effort they made into making sure that everyone who was on their mailing list received their end of the year mailers and thank you cards for those who donated and the absolute passion everyone working there had. I wasn’t the only one who saw their passion as they had also won the 2020 Bike Advocacy of the year award! While it was full steam ahead of making their supporters know they appreciate them, it was also full steam ahead on working to help the community. 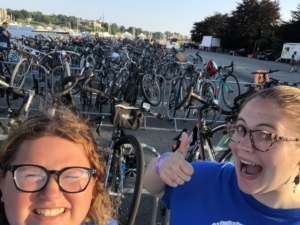 They were in meetings constantly to get new programs and ideas going, including one called “Bus to the Beach” which would bring Newport residents from the North End of the city to the Newport beaches. They were planning their summer camp program that would happen in the following months and they were advocating for the Green and Complete streets act, which was passed by Newport City Council in October! Bike Newport was also in charge of bike parking at the Beloved Newport Folk and Jazz festivals that were week-long events this year, which I had the pleasure of helping out at! 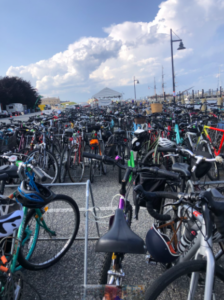 Folk Festival bikes are lined up and ready to go!

When I returned to Newport in the fall of my Junior year, I was greeted with Bike Newport’s newest addition, the Annex, a place for people to rent bikes and receive bike repairs. Bike Newport was in full swing with more ideas and initiatives. They were constantly holding amazing bike events as well, like their full moon rides and Tour de Fright for Halloween.

Like the year before, Bike Newport had volunteers come in and help with their Pell Giveaway. Numerous students came to help clean up the bikes and Salve’s Women’s Soccer even came by Bike Newport’s Big Blue Bike Barn to help clean their pump track for the giveaway the following week. The Bike Barn was also greeted by Salve students during Week of Welcome and got a spruce up for the beginning of the academic year.

I ended my fall semester at Bike Newport preparing for their end of the year mailers and thank you cards for supporters. Coming back in the Spring, I was greeted by the same energy and buzz that I did when I started coming to Bike Newport. Everyone greets you with excitement and incredible knowledge about everything bikes and road safety and their passion makes you want to jump out of your seat and start a non-profit yourself. If you love bikes or just love being in such a warm and exciting environment, come and volunteer at Bike Newport!

Want to join the discussion?
Feel free to contribute!